Bringing You In the Loop

We have a had a very productive time here at the Light over the past few months. Some needed steps have been taken to keep the house tight and some needed repairs arose that were handled beautifully by a crack contractor.

The banners went back up and in a new spot. I put the story of the house all in one place for people to read and to photograph. It also took them away from a window where I sit commonly to read. The banner detailing the Society\’s work find a home nearer the Edgerton Bell.

Stone that was not used to  settle the boardwalk was used all around the property to clean up edges.

Several of the stair began to crack after 207 years of ups and downs. My great brother in law fixed them in a matter of a few hours and I have begun the staining and poly process.

Part of the plan I worked out last summer for residing and shingling the house took a next step when we had half of the main house reshingled. The other side is in pretty good shape and will be power washed in the next couple of weeks.

I got a long wanted upgrade when all the ridge boards on the house were replaced with pvc. No more painting on the high parts of the house and a much better look from the window upstairs.

Flag Day saw the house decorated from corner to corner.  A nice addition was a flag commemorating the D-Day invasion 75 years ago.

The gardens have been treated to the perfect growing season weather. Without all the clean up of last year they were set to flourish from the start.  I took the step of planting grass seed outside of the kitchen which has led to some teasing about the new back lawn.  I am going to call it the putting green.

The first open house was on May 19th and as we were preparing to open on a rainy day, a knock came at the door. A mom, a friend, and two elementary school girls were on the step. I got them in out of the rain and they explained that the older of the two had a school project involving researching the Light. Our tour began early and with a wonderful resolution. This week the family returned with this note and some delicious baked goods. Also the amazing peonies you see below. This is a good, good gig. 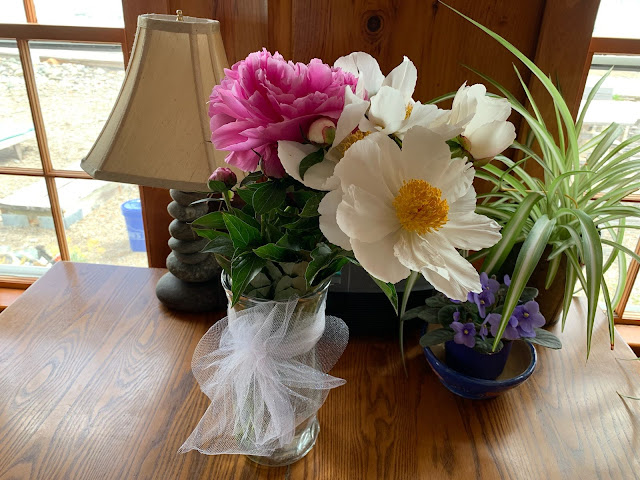